Introduction And Recap Of Past Sessions

Hi there, I am The Mind Tool, and I’m a novice Dungeon Master.

So far, I have run 5 sessions with DnD 4E with two different groups: one mostly comprised of drama students and the other mostly gamers. The second group will be the focus of this blog, as that is the group with which I am currently running weekly sessions. For each group, the first adventure I ran with them was the 4th Edition Red Box, with the first group making characters only using the Red Box player’s book while the second started after I had access to Heroes of the Fallen Lands and Heroes of the Forgotten Kingdoms, which I feel are vastly superior in terms of character creation (as the player’s book had several mistakes that made nonsensical characters like a halfling who could weild a greataxe). The first group was a good one for me to start with because I could just ask them to roleplay for a bit while I noobishly set up my next encounter, but I like the in-game creativity of the second group who have already tested my knowledge of the rules and my improvisational capabilities.

So, to start off with, one of my first improvisational challenges with my group (the second group will from now on be referred to as this) was starting the adventure, as the plot hook for the Red Box is part of the character creation process, and they had hardly touched it. For those who don’t know, the Red Box adventure, The Twisting Halls, the PCs encounter a dwarven merchant called Traeveus who is under attack by goblins. Traeveus is unharmed, but the goblins get away and have stolen a precious item from him – a small wooden box. The PCs are asked to help and are offered a reward, but Traeveus requests that they refrain from looking in the box. So, of course, all the players immediately want to know. This leads to several encounters and a suitable first-level dungeon with a variety of encounters to introduce the players to the wide variety of mechanics in the game.

In my experience running this adventure with new players, almost all of the encounters are pretty cool, with one major exception: Encounter 4: The Trial. At a first glance it seemed pretty cool – enchanted chess statues on an enchanted board that forces the players to use the movements of specific pieces? Cool. Except running it is frustrating. Limiting the players’ movement causes frustration and limits their tactics without opening up many alternatives, and they can only enter as one of four different pieces, two per entrance. And that’s just from a metagame perspective. Actually thinking about in-game rammifications causes the encounter to make even less sense. How exactly do the PCs know what chess is? How do the pieces miss their main attack, which is slamming into the PCs, without falling over? Why does the board require the actual destruction of pieces (which would be expensive to replace) and not follow the rules of chess properly? (a queen can take multiple hits from any other piece to kill) And, most importantly, WHAT IN THE NAME OF BATMAN RIDING CTHULHU IS CHESS DOING IN MY GORRAM DUNGEONS AND DRAGONS WORLD?!

In retrospect, my frustration is partially due to having to run this as the last encounter of a long session where I just wanted to get to the end of the adventure (they entered the boss encounter as their first encounter of the game and were feeling pretty awesome). However, if I run it again, I might just replace it with an equivalent encounter of my own design, and the atmosphere and feel of the dungeon wouldn’t suffer at all. (it may even improve slightly)

The highlights of the dungeon were the encounter with the level 1 fledgeling White Dragon Farralax (who scared the crap out of them), Kurrash the Bugbear (who the PCs practically stunlocked and felt very skilled for defeating) and the encounter with 3 human guards and 1 doppleganger sneak disguised as a human guard. They got through the last one by showing them the severed head of the guards’ boss and boss of the dungeon, Malareth and I couldn’t think of any reason for the guards to fight them at the time. Later I realised that the PCs had also taken Malareth’s money, which the guards may have been expecting in payment, but oh well. This encounter had the possibility that the doppleganger would turn on the last guard if there were just the two of them left against the PCs, and then offering the PCs a healing potion in exchange for his freedom. Well, I still wanted to show off the fact that one of the enemies was a doppleganger and give the PCs the healing potion, so I had Jixin (the doppleganger) transform into an elven female and thank them for killing Malareth. This became a highlight when one of the players (the owner of the Drow Ranger) saw me place down Jixin’s token showing their true doppleganger form, and exclaimed immediately “She’s so pretty! Can we keep her?”

Uh…
*remembers the advice “say yes as often as possible”*

So a short bit of roleplaying occured which resulted in Jixin joining the party. I am currently in the process of statting her up as a Rogue-class NPC. 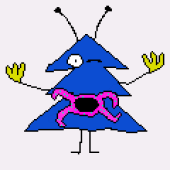