Turned Upon By Those Who Protect You…

After the last battle in the Arena, the group headed to their new home in the People’s ward to review the progress being done to it. Ralph then said goodbye for the day and headed home, while they returned to their inn. Upon arriving, the group was approached by the boy who was still at the inn, and given the message that Acelia had left the city with a group of rangers who wanted to show her the secret of the blight that had been affecting the cities crops. After an evil snicker from the Weirdlin guest of the inn, who explained that few in the city actually wanted a druid around – herself included – and that someone had acted fast on destroying the naive little thing. The group then rushed to start out in pursuit, leaving Gwen to get Ralph and Gallandro. Unfortunately, Gallandro already had started a spell and would not be done for eight hours. His pseudo dragon volunteered to guide him, and settled down on Gwen’s shoulders. After reaching Ralph, they decided they would never reach the middle gate of the city in time and left out of the farmer’s gate. Toll proved to be cleverer than the guards were diligent, as he cast a spell to cause the ground to rise up enough to stop the gate from closing. They met up on the trail down into the valley, leading into the forest.

The next morning, Toll did a magical sending to Acelia asking her to stall the rangers, which she refused to do – eager to find the source of the blight. Hurrying into the forest, Gallandro caught up as the group was searching for a trail left by the Rangers. Misha was able to smell their passage through her enhanced senses and track them by scent. The rest of the day was spent following the trail of the rangers, until it was too dark to track anymore.

As soon as their forward scout located the camp during the night, the group rushed forward to rescue their companion. They arrived too late, as the entire camp was in disarray, with the three dead rangers having been mauled by some great beast. The only weapon the ranger had out was a single dagger with Acelia’s blood on it. Taking off on a new trail, the group followed through the woods until it came to a stream. Misha determined that Acelia had been set down and that the beast had cleaned the wound some. From the prints in the wet embankment and the name given the creature by the pseudo dragon – who had just returned from seeing the creature – Kobort was able to give information from his early years as a ranger.

Apparently the creature was a Gray Render, a nine foot tall four foot wide beast of muscle with six eyes and a great gaping maw, and it may or may not have adopted Acelia to protect. All they knew for real was that it had Acelia and they needed to help her. The pseudo dragon informed the group then that the beast had mulched three trees in its great jaws and set Acelia there while it went to hunt. Hurrying to reach her before its return, they did so and Toll healed her. After speaking with her on what had happened, she sent the group back down river until she could commune with the beast to see if it wanted to help her. Reluctantly for some, the group agreed and moved back upriver to camp.

After setting up camp, Gallandro began to identify the items of magic that the group had gotten from the dead rangers, as well as to inform the group what had been identified from the orcs that had attacked. This took him until late in the night, after which he turned in. The next morning, after everyone had eaten breakfast and Toll had finished praying for his daily spells, the group saw Acelia walking down the bank of the stream towards them. Gallandro, however, also noted a magical image of a black dragon coming up out of middle of the stream, swooping around, and then splashing back down into it. While she began speaking with the party, he moved to investigate the stream.

It seemed that Acelia had decided to follow the ways of the druids with the Gray Render as her guardian – not one but three of the massive creatures. She no longer cared about the blight on the crops that the humans were causing themselves, but about the miles and miles of cut down tree lines with no replanting in sight. She told the group that she intends to follow her heart and make her place here. The great forest fire that had called her from her home was important yes, but it was receiving the attentions of many druids, where here there was none. Though Misha and Kobort were not happy with the decision, they respected Acelia’s choice and told her that they would be there if ever she had a need.

Meanwhile, after having Toll verify that the miniature black dragon image was real, Gallandro investigated the water where it kept diving and reappearing. What he discovered was a 10-foot diameter stone shaft under the water, with a magical barrier at the top of it to keep sand and silt from entering it. Determining that it was much too deep to swim down, the group decided to wait until noon when Acelia and Toll could re-pray for their spells to accommodate water breathing. After the long wait, Acelia cast water breathing on Lusipher, Gallandro, Gwendon, and Kobort and bid her farewells to the group. The quartet used Lusipher in his armor as a sinker, and descended the 100′ passage into the unknown.

At the bottom of the passage, they found the chamber contained the skeleton of a large dragon, which formed a horizontal passage perpendicular to the stream above. Passing through the passage, they came to stairs leading up into a small chamber with depictions of dragons painted on the wall, with a small passage leading further in. Checking the passage for traps, Gwendon started down the passage, only to discover that there was in fact a trap where she thought there was none. Flames shot out around the party, burning them in fiery retribution for invading the subterranean chamber. Four more traps were discovered, with only one successfully being navigated safely. What seemed like one trap for every breath weapon of the dragon species was encountered, with the sorcerer Gallandro nearly falling into a pit of acid. Finally, they made it through the gauntlet into a chamber with a pedestal coming up out of the rock itself, with a stone lid on top of it, held in place by two immovable rods. The party tried for some time to move the rods, but even Lusipher’s bulging muscles could not disengage the magical devices. It was finally decided that Toll would need to magically mold the stone in order to gain the gem that apparently was held within – The Eye of Khargus. However, that would have to wait until the next day when he could once again pray for the correct spells.

During the night, Gallandro asked if anyone in the group knew of the name Kyr’Saluth or had anyone seen this image. Apparently, when he woke up in the city after the group heading out without him, Balin had been waiting to inform him of their whereabouts, but had fallen into a trance and was mumbling the words repeatedly, while drawing the image. Ralph told Gallandro that it was none of Gallandro’s concern; while Toll was a bit more diplomatic and explained that the place was significant to the dwarves sort of like the heavens to the humans.

The next morning Gallandro, Lusipher, and Toll descended the passage and Toll was able to remove the rods with a creative use of a meld into stone spell. Taking the two rods, the Eye of Khargus, and the capstone with the symbol of the Draggeth Bahn on it, the trio returned to the surface. Unfortunately, this triggered the final trap, the awakening of the Black Dracolich! A massive battle began against the undead dragon, with many wounds taken on the side of the group, but finally ending with the death of the dragon. After taking a few choice parts from the dragon, the group dumped the rest of the bones into the water, and then headed back to town.

Upon reaching town, the group returned to the inn, to fill the others in on what had transpired. Balin remarked that if the stream they had swam in was visible only on the full moon of Khargus there may be a pattern. There might be other celestial pools within the valley that could be referred to in their clues. Meanwhile, Lady Arlinde took Gwendon to the side and gave her a tome to read, claiming that Royalty could only open it. Misha interrupted their talk and was rudely put down by Arlinde. After Arlinde walked away, Misha and Gwendon spoke for a few minutes, smoothing out their past differences for the time being.

The morning after returning from the forest the group sent Balin out to sell their items of magic. He returned several hours later with a pitiful 24,000 gold for many items that should have sold for at least twice that. It was an important lesson – never send a mad scribe to sell your loot. The rest of the group decided to split up to cover more ground, with Toll and Kobort going to the library, Lusipher and Gallandro going to the sage, and Ralph going to the furniture shop. The others decided to stay at the inn, or had private matters to attend to elsewhere. 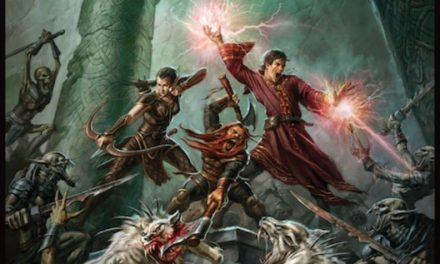 War And The Secret Of Enchantment